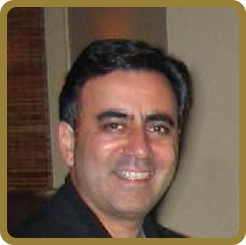 Ruben Chavez was drawing as soon as he was able to hold a pencil in his hand. Throughout his childhood he was encouraged to pursue his love of art and animation, so no wonder when after graduating from James A. Garfield High School in 1977 that he began his college years at California State University, Long Beach.

In 1980 he continued his college training when he was accepted at the prestigious Art Center College of Design in Pasadena California where he graduated in 1983 receiving his Bachelor of Fine Arts Degree in Illustration.

His professional career took flight when he landed his first art job as an Illustrator/Designer for RDI Video Systems working in conjunction with Don Bluth Productions on the now memorable arcade game Dragon's Lair.

Later he would pursue work at Hughes Aircraft where he was first introduced to the Apple Macintosh computer and from then on he would gradually begin to incorporate his traditional training and experience into the digital world as time progressed. After working for Filmation Studios for several years on such shows as He-Man Masters of the Universe and She-Ra Princess of Power, he moved on to work with Hanna-Barbera Studios as the Background Department Assistant Supervisor. His television credits would include Tom & Jerry Kids, Jetsons the Movie, Droopy & Dribble, Dark Waters, Fish Police, Capital Critters, Dextor's Lab, including several Flintsones Primetime Specials, and Scooby Doo Specials.

Shortly after, Turner Feature Animation would recruit Ruben to work on feature projects such as The Pagemaster and Cats Don't Dance. From there he would again be recruited by Warner Bros. Feature Animation to work on Quest for Camelot and the critically acclaimed The Iron Giant. Additionally television projects such as The Justice League and Lloyd in Space have been on Ruben's slate of work including a reunion with the original creators of Dragons Lair for the re-release of Dragons Lair 3D in 2003.

Listed below are Ruben's projects in chronological order to date.

He is a member of the Animation Guild, ASIFA Hollywood and an active member of The Academy of Television Arts and Sciences as an executive committee panel member.